John Brennan For CIA Chief ? A Headache for USA and Israel

"John Owen Brennan is chief counter terrorism advisor to U.S. President Barack Obama; officially his title is Deputy National Security Advisor for Homeland Security and Counter terrorism, and Assistant to the President"  He was educated at the University of Texas at Austin, Texas, the American University in Cairo, Egypt and Fordham University. 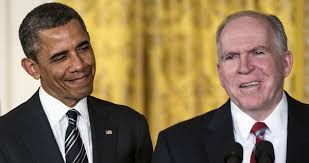 Perhaps that's why he is so flowery in his compliments in speeches to Muslims.  When I was complimentary to my Muslim friend, he chided me and saw through my words. Actually he wished I were more honest in my comments.   I'm sure most Muslims would feel this way about what the man up for being the Director of the CIA dealing with terrorism must be thinking.

Then again, maybe Brennan means all he says,  for it sounds like he's a man with his head in the sand and in denial about Islam and Jihad. In fact, in some circles he is called a pro-Jihadist.  He calls Jihad a legitimate tenet of Islam.  He argued further that " “jihadists” should not be used to describe America’s enemies. During a speech at the Center for Strategic and International Studies, John Brennan described violent extremists as victims of “political, economic and social forces,” but said that those plotting attacks on the United States should not be described in “religious terms.”

Brennan has believed that Hezbollah, the Lebanese terrorists, are moderates.  They are accused for the attacks and suicide bombings in Beirut in 1983 when 300 were killed; 241 American servicemen and 58 French servicemen.  "Brennan wrote that doing so would require the U.S. to persuade Israel to drop its “aim of eliminating Hezbollah as a political force.” "During the Bush administration, annual State Department reports on terrorism noted that “prior to September 11, 2001, [Hezbollah] was responsible for more American deaths than any other terrorist group.”  There hasn't been a word out about it since 2008.

"The Obama administration is looking for ways to build up “moderate elements” within the Lebanese Hezbollah guerrilla movement and to diminish the influence of hard-liners, a top White House official said on Tuesday." So Brennan met with Lebanese leaders recently and found Hezbollah to be very interesting.   He wants to build up their more moderate elements.  Isn't he lucky that Hezbollah are not his neighbors like they are Israel's?

Because of his attending the Cairo, Egypt university, he speechifies in Arabic, which doesn't let us Americans know what he's saying.  He said that Muslim terrorists are only as dangerous as shoplifters.  Lawmakers have called for his firing.

"As a college student in the 1970s, John Brennan, President Obama’s nominee for CIA director, traveled in Indonesia where – he recalled in a speech in New York in 2010  that has been aired on TV, – “despite my long hair, my earring and my obvious American appearance, I was welcomed throughout that country, in a way that is a reflection of the tremendous warmth of Islamic cultures and societies.”  He was speaking on Feb. 13, 2010 in  a meeting at the Islamic Center at New York University, facilitated by the Islamic Society of North America (ISNA),  He went on to say it was "a faith of peace and tolerance and great diversity.”

I thought that Chuck Hagel was a terrible choice for Secretary of State until I saw what Brennan's comments have been.   Born September 22, 1955 , he is the  son of Catholic Irish immigrants from Roscommon, Ireland and raised in New Jersey.  He wanted to do public service and felt that a CIA career would be a good match for his desire to travel.  He has been with the CIA for a long time doing analyst and administrative work in Washington DC and overseas work as a spy.  He was CIA station chief in Riyadh, Saudi Arabia when the Khobar Towers bombing killed 19 American soldiers.  He became a deputy executive director of the CIA in March 2001 and was director of the newly created Terrorist Threat Integration Center from 2003 for a year.

Brennan represented a team which killed Osama Bin Laden.  He turned down the chance to be director of the CIA in the incoming Obama administration because of opposition to his CIA service under President George W. Bush and past public statements he had made in support of so-called "enhanced interrogation techniques.  There's no doubt that he has had plenty of practice being with the CIA, but still doesn't agree with the dangers America is facing.

Obama is in his 2nd term of office and doesn't have to worry about amassing votes now.  He's picking people to run his business that are the antipathy of being in tune with our nation and its history but are supporters of our President's views, proven by his selections.  What both Hagel and Brennan stand for is pretty shocking when you get down to the bare facts.

Brennan has been soft all along towards terrorist groups as was Obama.  Yet he turns around and yells about Trump being soft with Putin in his first meeting with him.  Hasn't Brennan ever heard the old adage that actions speak louder than words?  How about, speak softly but carry a big stick?  I haven't approved of either his words or his actions.  For one, he was against Trump moving the US embassy to Jerusalem.  From what I have read, he's more interested in the Palestinians having more rights and a homeland but less about Israel's rights.

" There is the phenomenon of the ‘Arabist’ — the Westerner who studies Arabic and is so taken by the culture that he adopts the Arab worldview and politics. T. E. Lawrence is probably the most well-known, but contemporary examples abound (for example, the academic Juan Cole). "Could be that this is the view that Brennan most likely has taken.

Why can't these nominees be like  Jethro Gibbs, seen on NCIS?  He's quiet, honest and nobody fools him.

Posted by Nadene Goldfoot at 8:14 PM