Judea-Samaria Areas A, B, C: Who Lives There and Future 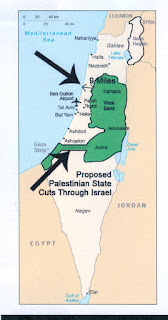 Nadene Goldfoot
The Oslo Accords were signed in 1993 and the Judea-Samaria region was divided into areas A, B, and C.  Israel has full control of Area C where most of over 340,000 Jewish residents live.

Area A was assigned to the Palestinian Authority (PA) and Assad became Chairman who took over from Yassar Arafat of the PLO terrorists.  Most of the Arabs live in this area.  Area B is under joint control and has large tracts of barren land.

A conference scheduled for today, the third annual one,  is discussing whether area C should have Israel sovereignty and annex it.  Others feel the whole area should be annexed.  The sub title of the conference  is "From the Edmond Levy Sovereignty" organized by Women for Israel's Tomorrow, known as the "Women in Green."

The Arab population is not known exactly, but a close estimate is 1.5 million.  It's been hard getting accurate statistics because of the habit of Arab demographics in the past being artificially inflated by both  the British and the Palestinians.

Judah was the Jewish state formed out of the division of Israel after the death of King Solomon.  Rehoboam, Solomon's son by  his Ammonite wife Naamah,  was the first king (933-917 BCE). The state had 20 kings with the last being Zedekiah (597-586).

Israel, the nation created by King David, has been later called Samaria since  Samaria was the capital of Israel, consisting of 25 acres, founded in 880 BCE by King Omri (887-876 BCE) , the 6th King after King Jeroboam (933-912 BCE) on a hill bought from Shemer.    Samaria withstood the siege of the Syrians but fell in 721 BCE to Sargon II of Assyria who carried off 10 of the 12 Israelite Tribes and then  resettled it with Cutheans (idolaters) who intermingled with the rest of the population but were refused marriage with Israelites.    They became the ancestors of the Samaritans.  The name, Samaria, also is applied to the entire northern region, formerly Israel of the central highlands.

Jordan had illegally grabbed and occupied Judea-Samaria and east Jerusalem in 1948 when Israel was born again. According to the Balfour Doctrine, it was meant to be a part of the Jewish Homeland.  As it was, the 1948 Israel consisted of only 20% of the original promised Jewish Homeland.   It took till the 1967 attack on Israel by 8 Arab nations with Israel the winner that the formerly Jordanian-occupied neighborhoods of Jerusalem, including the Old City were officially incorporated as parts of Israel along with the Golan heights.  Judea and Samaria were never officially annexed by Israel, but the IDF Civil Administration has jurisdiction over the districts.

Abbas is threatening that if Netanyahu doesn't meet his demands, which are completely unreasonable and impossible,  he will not even sit down and talk about peace and is about to quit, putting the "West Bank" (Judea-Samaria) in Netanyahu's hands.  Netanyahu is still all for a 2 state solution.

Posted by Nadene Goldfoot at 12:51 PM