Nadene Goldfoot
Mohammed Badie is the head guide of the Muslim Brotherhood and has been since January 16, 2010.  He represents the worst type of philosophy, akin to Nazism.  Even the Liberal Egyptians are wary of him.  Qaradawi seemed to be the head earlier but when the Muslim Brotherhood was banned in 1954, he had no future in Egypt so moved to Qatar in 1961 where his theological influence on Egypt continued.

This 69 year old veterinarian earned his degree in Cairo in 1965 and in the same year was arrested for his political activity in the Muslim Brotherhood, which was outlawed.  He was sentenced to 15 years in prison, then paroled in 1974 by Anwar al-Sadat.  He taught in various Egyptian universities.

Badie accused the Arab and Muslim regimes of avoiding confrontation with the a"Zionist entity" and the USA, and of disregarding "Allah's commandment to wage jihad for His sake with their money and lives, so that Allah's word will reign supreme and the infidels' word will be inferior.  He said that the USA is immoral and doomed to collapse, and said the PA (Abbas) sold out the Palestinian cause.  He added that the 3rd intifada was about to erupt and that "resistance is the only solution against the Zio-American arrogance and tyranny, and all we need is for the Arab and Muslim peoples to stand behind it and support it."

Badie  said that the Jews have dominated the land, spread corruption on earth, spilled the blood of believers and in their actions profaned holy places, including their own. Ah yes, Jews happen to be 0.02 % of the world population, compared to the Muslims who make up 23% of the world population. Dominate the land!  Jews couldn't even buy land in Europe, and they were forced to be dminnis (2nd class) in Muslims countries.

Badie is  just about describing the actions of Hamas terrorists in Gaza.  He wants the Arab world to reject negotiations with Israel in favor of "Holy Jihad."  He says the Zionists only understand force, whereas it seems that that is the only thing that Hamas understands.  When it comes to the Temple Mount, Judaism's holiest site, which is the remnant of the wall from King Solomon's Temple, he thinks that Jews praying there would result in the destruction of the Al-Aqsa Mosque.  Jews have good reason to believe that the Muslims have been destroying antiques in the Mosque from the days of being the Temple.  "In July 2007 the Muslim religious trust which administers the Mount began digging a 400-metre-long, 1.5-metre-deep trench from the northern side of the Temple Mount compound to the Dome of the Rock  in order to replace 40-year-old electric cables in the area. Israeli archaeologists accused the waqf of a deliberate act of cultural vandalism.

He should have stuck to veterinarian causes, like beating the paro-virus.  He has his facts all messed up.  Yet, why do people listen to him and follow his ideals?  Could it be that they can't read?  If you can't read, you surely can't do much on Internet, so the only resource you have of news would be al-Jazeera TV from Qatar, headed by Qaradawi.  He seems to be a cookie-cutter Qaradawi in his hatred for Israel.

Now, how many are bilingual is another story, for if they do not read or understand English, they are only getting a one-sided view of history and the world.  I was part of a program for the Israeli government to teach English, and taught in a junior high.  Many religious groups have gone into Muslim countries to teach English, which can be very dangerous for the teachers as they are accused often times and maybe rightly so, for teaching their religion as well.

Badie, just in July 2012 in his weekly sermon, stated that Israelis are "rapists" of Jerusalem, and called on all Muslim to "wage jihad with their money and their selves to free al-Quds. He disregards the Jewish history and that Jerusalem was founded by King David, a Jew in 1,000 BCE,  which means that Jerusalem and Israel and Judah are our 3,000 year old Jewish history.   In other words, another religious zealot is saying to kill Jews to take over Jerusalem.  He refers to  the creation of Israel in International Law as an  "alleged, illusory right."  Therefore, he has no regard for the UN as well.  If the Arabs refuse to recognize Israel, how can they expect Israel to recognize Palestine?  Or, how can the UN recognize Palestine when they refuse to recognize Israel?

November 22, 2012, Badie said that peace deal with Israel are a "game of grand deception."  Again, he wants force to be used as that is the only thing that Israel understands, he thinks.  He pounds in the idea that Jihad is obligatory for Muslims.  This was said the day after Morsi brokered a truce after 8 days of Israel and Hamas fighting.

To the illiterate souls who abound around Israel, Badie's words  would be like hearing the Gospel or word of G-d.  It happens to be all wrong.  Israel was created in a peaceful and legal process that took many years of meetings and more meetings.  The United Nations put it through.  It was not created out of Palestinian lands, as we know the word today "Palestinian" meaning Arabs.  Before 1948, both Jews and Arabs were Palestinians that lived in land held by the Ottoman Empire and known as "Palestine."  The Ottoman Empire Turks ruled the land for 400 years.  They lost it when they were defeated in WWI.

The Arabs who lived in Palestine considered themselves to be Syrians, not Palestinians.  There was no country of Palestine.  That was simply the name given to the land by the Romans.  They had taken Jerusalem in 70 CE.  Jews had a final revolt trying to get rid of them in 135 CE by Bar Kochba and failed.  Thus Palestine became a hateful name as it was the name of enemies of Israel and Judah.

After WWI, Jordan, Syria, Lebanon and Iraq were created artificially out of the Turkish Empire by the British and French victors of WWI.  Transjordan was created out of about 80% of the Palestine Mandate which was originally designated by the League of Nations as part of the Jewish Homeland.  Then later the king called it Jordan when he seized Judah and Samaria illegally in 1948.  Two-thirds of Jordan's citizens are Palestinian Arabs, but its ruler is  Abdullah II, a Hashemite king, though he is married to a beautiful Palestinian girl, now Queen Rania,  whose parents were "Palestinians" from  Samaria's Tulkarm (West Bank) but had moved to Kuwait, where Rania was born. The family moved to Jordan in 1991.

In 1948, the UN partition plan mandated the creation of 2 states on the remaining 20% of the Palestine Mandate:  the State of Israel for the Jews, and another state for the Arabs.  The Arabs rejected their state and instead, attacked Israel.  After starting in around 1880 and continually working , Israel was at last to become a state on May 14, 1948.

Jews have been fighting the last 2,000 years since our separation from Judah,  anti-Semitic  discrimination, exclusion, and persecution that has historically occurred in the diaspora (outside Judah).   Israel means more to Jews than ever since the Holocaust.  The Arabs haven't given up on their ambition to drive Israel into the sea and pile up so many conditions for sitting at a peace table that they are sure to never have to worry about maintaining a state.

Badie is not popular with all of Egypt, for the opposition to the Muslim Brotherhood's most fervent chants were aimed at Badie who think he is secretly ruling Egypt.  "Down with the guide!" they yelled.  He is seen as the dark prince of a coming Islamist tyranny.  He keeps on delivering these terrible sermons and speeches to a widely illiterate listening audience. 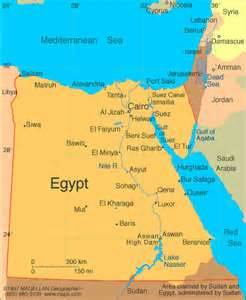 Posted by Nadene Goldfoot at 4:05 PM