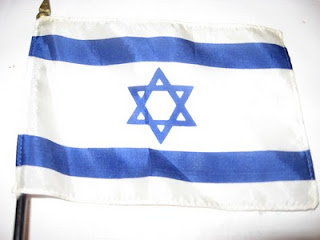 Nadene Goldfoot
The Palestinians wish to obliterate any show of Jewishness of Israel in order to say that we have no business being there.  They must cringe every time they see the Israeli flag, which was unfurled for the first time on May 11, 1949 at Lake Success, New York when Israel became the 59th member of the United Nations.

The design is that the blue and white colors with the Shield of David on it.  This Star of David remember's Judah's second king of the Jews, King David 1000-960 BCE.  He is the father of King Solomon.  King Saul was the first king and David, at age 25, became his armor-bearer.  David had been the best friend of Saul's son, Jonathan.  David later married King Saul's daughter, Michal.  Unfortunately, Saul became jealous of David.

The continuing story of King David would make the writers of "All My Children" absolutely  awed.  I love how our Torah tells all, making the reader realize this is the true story and isn't doctored by only telling parts that praise the main characters.  We read about all his flaws as well.

What Abbas and his Fatah people are doing are trying to obliterate anything Jewish in Jerusalem, of all places.  This city in the mountains of Judea is the capital of Israel.  The first time its name appeared was as U-r (city) ushamem in the Execration Texts from the time of the Egyptian 12th Dynasty (19th-18th century BCE) in the Akkadian language.  Then it was called Urusalim in the Tel el Armarna letters (15th century BCE).  In the early books of the Torah, it is also called Jebus after the people inhabiting it before David.  It is sometimes called Zion, after David's fortress, and was also known as the City of David.  Our bible also calls it the "city of righteousness,", "the faithful city", "the city of G-d", "the holy city", "the city of truth".  The Hebrew pronounciation is  Yerushalayim (Yeh roosh all eye eem) .

Though the city's actual foundation was built in the Early Bronze Age (3500-2000BCE) to the period when the Canaanites first established themselves in the country,  from 2000-1550 BCE it was the capital of a Canaanite city state.  When Joshua came into the land in 1320 BCE the king of Jerusalem was defeated and it remained an independent enclave between the tribes of Benjamin and Judah.  David captured the city in 1910 BCE and it became the capital of a united Israel.  He was very lenient with the people living there and added the fortress of Zion and other construction.  The Ark of the Covenant was transferred there as well.

This is the city that Jews have been remembering in their prayers for the past 2,000 years.  Islam was born in
610 CE by Mohammed, who was born April 26, 570 in Mecca, Arabia and died June 8, 632.  At age 40 he had his first revelation.  Jerusalem was only important to Islam because he rose on his white horse from there.  Otherwise, Saudi Arabia is the center of Islam.

The UN partition resolution of November 29, 1947 provided for the creation of an independent area of Jerusalem under UN administration.  Arab outbreaks soon reached the state of regular warfare between the Haganah and the Arabs who first were made up of local bands who were joined by the Arab Legion of Transjordan.  This put an end to  the internationalization scheme.  From December 1947 to July 1948 the Jewish Quarter in the Old City had to be evacuated which was then destroyed.  All the New city, except the Arab quarter north of the walls fell into Jewish hands.  The Arab Legion shelled and starved the Jews of Jerusalem too,  but they did not surrender.

Jerusalem from 1948 was divided into two parts.  The Israel section included the whole of the West and South part of the New City, including "Mount Zion" and an enclave on Mt. Scopus.  The city was the administrative center of Israel.  When the 6 Day War started on June 5, 1967, Jordanian troops in the Old City and Jordanian sections (held illegally)  bombarded the New City.  Israel's army reacted and in 2 days the entire city came under Israel's control.  The first reaction were mass visits of Jews to the Western Wall that had been kept from Jews for almost 20 years.  By June 29, 1967, Israel formally united the two sections of the city and the barriers that had divided them were removed.  At that point there were 139,600 Moslems and Christians that were incorporated into the total population of 493,500 (1990 census).

The Jerusalem Law of 1980 extended Israel sovereignty over the entire city.

Hatikvah is Israel's National Anthem.
So long as still within our breasts    The Jewish heart beats true,
So long as still towards the East, To Zion, looks the Jew,
So long our hopes are not yet lost---Two thousand years we cherished them---
To live in freedom in the Land     Of Zion and Jerusalem.

We are not a just a band of people tired of being picked on that just happen to be Jews.
We were so desperate that we even considered creating a state for ourselves after the Dryfus affair of 1894 in Africa after the British offered land in 1903 that is today's Kenya, and quickly realized that wasn't where our history or heart was.  We were from Judea and Israel and knew it was time to go home, our one and only true home. That's where Abram and his father, Terah, and Lot, the son of Haran, his grandson, and his daughter in law Sarai, the wife of Abram left Ur Kasdim (Iraq) for the land of Canaan, and they arrived in Haran and settled there where Terah later died.

Reference: Israel , from Embassy of Israel, Washington D.C.
Standard Jewish Encyclopedia
http://www.usa-people-search.com/content-the-dreyfus-affair.aspx
Tanach, The Stone Edition of the Torah/Prophets/etc.
Posted by Nadene Goldfoot at 11:44 AM