The Arabs are after Israel again since giving her a break for two years about whether or not she has any alleged nuclear arsenal. Israel established its own IAEC on June 13, 1952.  The Arabs have been guessing about their procurement ever since, possibly. It is one of four nuclear-armed countries not recognized as a Nuclear Weapons State by the Nuclear Non-Proliferation Treaty.   "Israel has never officially admitted to having nuclear weapons, instead repeating over the years that it would not be the first country to "introduce" nuclear weapons to the Middle East, leaving ambiguity as to whether it means it will not create, will not disclose, will not make first use of the weapons or possibly some other interpretation of the phrase." This is called nuclear ambiguity, which is their policy.  India, Pakistan and North Korea are not among the nations in the treaty, either.

They, of all people, are now using this as an excuse to blame Israel’s silence about it as a threat to Middle East peace.  Iran is a state that sponsors terrorists.  They are the ones who the world knows are building atomic energy and has already threatened Israel with it.

This Arab push was the main subject of their recent annual meetings of the 159-nation International Atomic Energy Agency, where usually this vote against Israel is voted down by Israel’s allies.  During 2011 and 2012 the vote was suspended which the Arabs took as a concession which kept their hopes alive on banning weapons of mass destruction from the Middle East.   That was co-sponsored by the US, Russia and Britain which was called off late last year.

Do they raise a row about Iran working madly to achieve their nuclear goals?  Not a word.  It is Iran who threatens Israel through all the mass media.  Israel has not threatened anyone.  This thought is probably one thing that keeps them from attacking again.  There should always be a question in their minds as to whether or not Israel has such weapons and if she would use them. 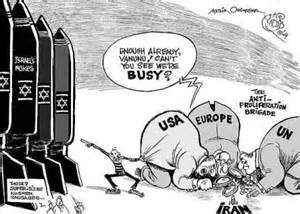 So far, this teeny country of 8,000 square miles and about 7.6 million people have been able to stave off and win all the wars that have been made against her from 1947-8 War of Independence, 1956 Sinai War, 1967 Six Day War, and 1973 Yom Kippur War.   I was there during the 1982 war in Lebanon where the Palestinians had Kiryat Shimona citizens pinned down in a bomb shelter for days on end.  Evidently they didn't bother to think about Israel's potential nuclear power when they attacked her during these past wars.

There is one state in this world who threatens us all with atomic nuclear weaponry capabilities, and that's Iran.  No doubt the first on the list to be hit would be Israel and secondly would be the USA.  Not being forgotten would be all of those that are Iran's competitors, Saudi Arabia and the rest of the Middle East who do not comply to Iran's wishes.  So what do these wise ones do?  Join Iran in picking on Israel.

Israel is most worried about Iran after receiving threat after threat from them.  They are working very fast to complete their goal, and Netanyahu feels that they will reach it within a few weeks.  This must have something to do with the Arabs reversing their attitude in the UN and picking on Israel to be under the microscope.  "In 2005, Iran made its first advance in the production of enriched uranium and subsequently established a secret nuclear research center to train scientists in all aspects of atomic technology.

John Bolton, former US Ambassador to the UN says that Israel should have attacked the Iranian reactors yesterday.  The more they wait the more in danger they are.  We remember Prime Minister Netanyahu standing before the UN warning them with a graph about the red line that Iran was nearing every day.  Sanctions have not been working.  Now the world should delve into Israel's arsenal according to the Arabs; not Iran.  Huh?  Really?