America's Prize Was Lebanon and What Happened to It? 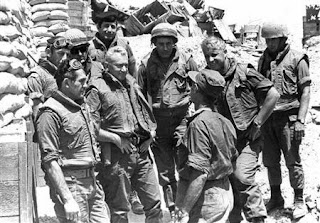 Prof. Moshe Sharon            Major General  Ariel Sharon with troops 1970 photo. Sharon was born in February 27, 1928 in Kfar Malal, Palestine and died Saturday, January 11, 2014 at the age of 85 in Tel Aviv, Israel. .  He has been in a coma for the past 8 years.   Ariel Sharon was  born in what was then Palestine under the British mandate. "His parents, Shmuel and Devorah Scheinerman, had been Jewish immigrants from Russia after World War I."  The PLO was in Lebanon in 1982 and were constantly firing on Israel's border, placing people in Kiriat Shimona and the whole border of Israel with Lebanon in bomb shelters for long durations.  Sharon had enough of that and wanted to stop it.  The PLO were a security threat.

...One may ask whether the American delegation in Beirut during the Sabra and Shatilla massacre was not responsible for the exaggerated new reports that emerged. This happened when Major Haddad asked Major General Ariel Sharon if they shouldn't be the ones to go into the PLO camps in an attack.  Sharon said yes and got the blame for what transpired next.  He later stated that he had no idea of what the Christians were planning on doing.  The Christians in the Lebanese Christain Militia were angrier than Sharon had realized at the PLOs.  They wiped them out in a very quiet manner.

In 1984 Professor Moshe Sharon wrote an article that I mailed to my mother when I lived in Israel.  He explained the situation then so well about Lebanon and the PLOs.  In it he said that,

"To put the matter in the clearest terms, whichever way one looks at it, the Israeli operation in Lebanon has been one big prize for the Americans.  Militarily, it was the triumph of American arms over Soviet arms.  Two Soviet clients and allies, the PLO and the Syrians, were severely beaten or militarily destroyed.  Politically, the Soviet Union has been badly discredited in the Middle East, and is now having to reconsider its military build-up against NATO in view of the poor performance of its missile systems in Syria.  In addition, Lebanon is on the way to freedom from the terror that tore it to pieces for so many years;  and Beirut which the PLO used as a base to spread the venom of terror all over the world, is now a free, open city.

Most important, the door was opened by Israel for the U.S. to establish in Lebanon a strong, permanent military and political base, an achievement which nobody in America could even have dreamt about before June 1982.

How is Israel repaid by the United States?  It is not even left alone to pursue, unhindered, peace negotiations with Lebanon.  On the contrary, pushed by their Saudi mentors, the American policy-makers from the president downwards are doing everything possible to strip Israel of its gains in this war.  While the war was still in progress, President Reagan came out with a plan which, although it bears his name, is in this writer's view nothing but an American version of "the Fahd plan."  In the long run it aims to establish a Palestinian state in Judea and Samaria and re-divide Jerusalem.  In other words, reduce Israel to what the Arabs call its "natural size,"  which would make it an easy prey.

The mere presentation of Reagan's plan as the official U.S. solution to the Arab-Israeli conflict has dealt a death blow to the possibility of peace in the Middle East.  furthermore, the credibility of the U.S. has been almost completely destroyed for the plan undermines the Camp David Accords and the "peace" treaty with Egypt.  It also legitimizes Egypt's backing out of most of its responsibilities as stated in the peace treaty.  first and foremost among these is the commitment to carry on talks with Israel concerning Arab autonomy in Judea and Samaria."

One may also ask if the same delegation was not responsible for sending to the camps representatives of the American and world media who were already pumped-up against Israel.  Who, one may ask, was responsible for spreading like wildfire through the world press the exaggerated and imaginative claim that thousands of women and children were killed in the camps?  But more than that, who is hindering the Lebanese government from arriving at a clear-cut, quick and simple peace agreement with Israel?  "

The answer to this question was the United States.   "The American delegation headed by Morris Draper convinced the Lebanese president that he does not have to worry about Israel---it will be dealt with by the Americans.  They told him to mend his fences with the Arab world, with the Syrians and possibly even with the PLO.  In other words, the U.S. is intentionally hindering a peace treaty between Israel and Lebanon, which most Lebanese are yearning for."

He tells the reader that this is a Saudi policy and the outcome is that the Egyptian peace treaty was in shambles with the Egyptians being armed by the US.  In Lebanon pressure was put on Israel and it was possible that the Syrians and the PLO would not leave the Lebanon.  "This is nothing but a sure recipe for a new war."

This piece written in 1984 by Sharon, year of "Brave New World" by Aldous Huxley and the book 1984 by George Orwell , was 30 years ago.  I am appalled at how on the target Moshe Sharon was.   My country of the USA is still bungling when it comes to doing the right thing in the Middle East.  Obama was not the first president to not back Israel.  Israel must remember that the USA will always put America first, Israel last.  We were lucky to have had President Truman at the time of Israel's re-birth.

The writer, Professor Moshe Sharon was born in Haifa in 1937.  He graduated from Hebrew University and  U. of London.  He did research in Oxford, Paris and Dublin.  Sharon was the chairman of the Dept. of History of Islamic Countries in the Hebrew U and a former adviser to the prime minister  on Arab Affairs. Fatah is today's former PLO terrorists.