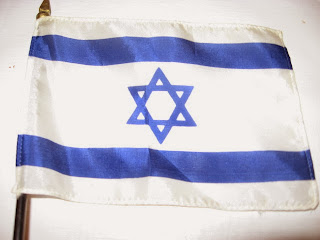 One reason we're having an impossible time making peace with the Arabs who came into "Palestine" recently to find jobs with the Jews is that they have no concept of history, factual history.  These Arabs of today have been led to believe that Israel belongs to them and that the Jews stole it away from them.

This is not factual at all!  I blame their parents and grandparents and great grandparents for deceiving these young people about their history as well as all the nations who have fed into their delusions.  Their schools are culpable since they teach this.  Their whole culture is now based on these lies and it shows up in everything they do when a camera is on them.

The EU and the World Bank are the funders of a program (NGO) for the young people on Palestinian TV. It  was co-produced by PA TV and Pyalara, a Palestinian NGO for youth.  This is funded by NDC (NGO Development Center.)  The NDC's donors are:  EU, the World Bank, the French government's Agence Francaise de Developpement, and a donor consortium of Switzerland, Denmark, the Netherlands and Sweden.   One of the programs was called "Sight of Jerusalem" that was broadcast in October.   The announcer said that Israelis in Jerusalem, which they covet highly and intend to take over in the peace process, are "crows and rats."  This seems to be a slight improvement over Iran's calling Jews a "virus."

They announced that only Arabic will be spoken in Jerusalem.  This is a subtle way of saying they are taking Jerusalem, and this is not saying East Jerusalem; simply Jerusalem, meaning all of it.  Then they go on to say that only Palestinians will be the nationality allowed in Jerusalem.  So this also cuts off any other Muslim nationalities like Pakistan, Afghanistan, Iraq, Syria, Lebanon, etc., only Palestinians allowed there.  They are not a nation, either, but a hodgepodge of many Arabs from all the surrounding countries.   This is pure apartheid announced to be practiced by this particular Arab group.  Believe me, if DNA testing were done on this political group, we would see an assortment of origins, being they originally came from ALL the surrounding countries of Israel seeking jobs in the late 1800's.  There were only a handful of Arab  landowners here being most of them had left long ago for Paris, Beirut, Damascus, and other ports where there was an enjoyment of living going on.

The broadcast of Sights of Jerusalem should have been viewed again at the peace table with Abbas and Israel's representatives to remind Kerry of the group's intentions.  The program denied Jewish history and the Jewish connection to Jerusalem by calling Israelis "foreigners."  Israel has had Jews living in the land ever since Jerusalem fell in 70 CE to the Romans.  They didn't all leave.  We have had the descendants of the Jews who fled return to their ancestor's land now.  Arabs did not originally live there.  Only Jews and Romans were on the land.  Any people from before Joshua and the 12 Tribes conquering the land were either killed or assimilated into the Jewish people there at the time.  They did not suddenly appear in the so called Palestinian people.

The narrator of this program called the blue and white Israeli flag the flag "of the foreigners" and called the white in the flag the color of a rag dipped in their blood instead of saying it was the color of peace.  How they connect this is beyond me, since blood is red, not white, but now we have been told.  They have white blood.

Pyalara (The Palestinian Youth Association) glorifies suicide terrorists.  This has been documented.

In the program they comment on the wall saying it disturbs them.  The audience is left dumb about the fact that the wall has saved lives of the Israeli citizens against Palestinian suicide bombers and such attacks.  They pan the Israeli flag in many ways as well as the star of David saying it does not light their way.  Then they talk of their unfounded fears as if they are real ones, that they may wake up to locked gates and expropriated houses in Jerusalem.   The only people who have suffered from this sort of thing have been the Jews who were locked in ghettos in Italy and also other places long ago.  I get the feeling that what they would do to Jews they fear will happen to them.  Of course they tell the youth that the gates of Jerusalem only smile for them.

Need I remind these Arabs that the land sat for 2,000 years and nothing happened to it.  No building, no trees, no food was grown there. Very few people lived there.  Nomads wandered through with their camels.   The only thing that happened was that weeds and mosquitoes grew in abundance.  They had 2,000 years to  claim the land.  They had from 1947 to 1967 and they were like they always have been. . Nothing happened to the land that Jordan held which included East Jerusalem.  They multiplied but did nothing with the land.  There was no state of Palestine.  The Palestinians didn't even consider a need for their own state since most declared they were actually Syrians.  Only after the failure of taking Israel by the many neighbors in 1967 did they suddenly make this noise about having a "Palestine."  It's simply a new tactic that the tired nations of the UN have caved into.  The League of Nations had voted all this land to be the Jewish Homeland but then 80% was given to Jordan in the end and now Israel is fighting for the 20% left for them of which  with the USA leading are ready to give away as well with  Kerry's leadership.