In 2011, archaeologists Uncovered  the  ruins of  the biblical city  of Shechem, or as we know it today as Nablus,  in war-torn Israel.  The biblical ruin lies inside a Palestinian city in Judea-Samaria; the (West Bank,) where modern researchers are writing the latest chapter in a 100-year-old excavation that has been interrupted by two world wars and numerous rounds of Mideast upheaval.  Excavation on Shechem was started in 1913 to  1934 by German archaeologists.   From 1948 to 1967 this land was in Jordanian territory illegally and since the 1967 War is under Israel's control.  It's earliest walls date back to 2000 BCE.  It was under Egyptian control as early as the 12th dynasty BCE.  Our biblical patriarchs camped under its walls and it was pillaged by Simeon and Levi as told in Gen.34.   Later, it was in the territory of Ephraim, and was a Levitical city and a city of refuge as well as the center of the House of Joseph.  Joseph is buried there.

Before naysayers say that the Old Testament is just a bunch of myths, they should check out what archaeologists have already proven.

Nelson Glueck took a Transjordan survey which is thought by some scholars to show that the Israelite entry (Exodus into Canaan) did not happen earlier than the 13th century BCE.  My encyclopedia has Moses dying by 1271 BCE  and our history is that he was not able to enter the land as he was already 120 years old by then, so had chosen Joshua to lead the Israelites in.  So they are in agreement with this.  It would not have happened, say, in the 14th century.

The Merneptah stele which is dated c. 1231 BCE sets a terminus ad quem   (to which there) for the Exodus.   Others thought the same and this resulted from the researches at Jericho, Bethel, Lachish, Tel Bet Mirsim, Hazor, etc.

Pottery study has identified the Philistines, and work at Gibeah (Tel el Ful and Jerusalem which we also call Zion has cast light on King Saul's and King David's reign, just as digs at Tel el-Hesi and  other places may have revealed King Solomon's chariot stables, and Tel el-Khalife, which is also called Ezion Geber, his trade and mining center.

Bible study is illuminated by archaeology both in and outside what was then, Palestine, now mostly Israel.    The Mesopotamian discoveries of Ur of where Abraham was born do indicate a period of great floods which are reflected in the biblical Flood Story found in Genesis.

There are the well known Tel el Amarna tablets from the 14th century BCE which illumine the Israelite advent.  The Hammurabi  and similar legal codes of the 18th century give us the background of Mosaic legislation  and the legal habits of the patriarchal period. 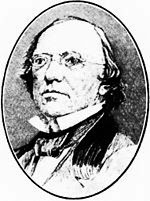 Edward  Robinson in 1838-1852 was an archaeologist who tried re-identification of biblical sites.  "Robinson traveled to Palestine in 1838 in the company of Rev. Eli Smith, leading to the publication of Biblical Researches in Palestine and Adjacent Countries for which he was awarded the Gold Medal of the Royal Geographical Society in 1842 He was elected a Fellow of the American Academy of Arts and Sciences in 1847. Robinson, together with Smith, made scores of identifications of ancient places including the tunnel dug by King Hezekiah shortly before the Assyrian siege of Jerusalem in 701/02 BCE, though the inscription at the southern end of the tunnel was to be found later.  The Robinson's Arch in the Old City of Jerusalem is named after him."  Edward was a farm boy from Southington, Connecticut born 4/10/1794.  He is a direct descendant of the Reverend John Robinson who sent the Pilgrims over from Holland to America on the Mayflower in 1620.  Most likely his Christian religion was the motivation for his digs in Palestine.

He was followed by a lot of travelers in the 19th century.  F. de Suley carried out the first excavation of the Tombs of the Kings in Jerusalem in 1850.  The English Palestine Exploration Fund in 1865 started C. Warren's Jerusalem excavations in 1867 and a survey of Western Palestine was done in 1872 to 1878 by Conder and Kitchener.  His digs coincided with important work by C. Clermont-Ganneau, G. Schumacher and others.

By 1890, W. Flinders Petrie was at Tel el-Hesi and devised the system of pottery dating by looking at the stratification and cross dating it with Egyptian finds.  This started the methods used afterwards at Gezer, Samaria and other places.  They were able to go back to the Old Stone Age, or the Middle Paleolithic Age found in the Carmel and Nazareth skeletons, intermediate between Neanderthal man and Homo Sapiens. The Mesolithic's Middle Stone age culture is represented by the Natufian cave-dwellers, the first cultivators who lived around 8,000 BCE, and Neolithic, most strikingly by the Yarmukian settlement of Shaar ha-Golan.

By 5,000 BCE, walled village settlement had evolved as in Jericho.  The use of copper began c 4,500 which started the Chalcolithic age in Jericho, Telulat Ghassul, and in the Beersheba district.  In 3,200-2,100 BCE we find the Early Bronze Age.  The Middle Bronze Age was from 2100 to 1500 BCE.  The Late Bronze Age was from 1500 to 1100 BCE which had walled towns that were spread out as revealed by excavations at Bet Yerah.  Megiddo, Jericho, Bet Shean, Tel Bet Mirsim, and so on are examples of that period.

Research has even revealed the famous Hyksos of the 18th century BCE with fortresses at Hazor, Shechem and Horite or Hurrian migrations from the 17th century and growing Mediterranean contacts under Egyptian rule such as in Bet Shean from the 1500 to 1100 BCE period.

Discoveries of the Ugarit (Ras Shamra) include  old Canaanite texts from 1880 to 1200 BCE. They shed light on the earliest poetical parts of the Bible.  Epigraphical finds at Sinai, Gezer Calendar, Siloam, the Moabite Stone, Lachish letters and the Arad Ostraca show the development of the Hebrew alphabet.

Archaeology in Samaria has uncovered the palaces of Kings Omri, Ahab, and Jeroboam II and show the Phoenician affinities of their culture.  Many sites such as Megiddo and Lachish have  given us dates and show the extent of the destruction that came before the Babylonian exile.

The later Second Temple Period has brought researches into the tombs and ossuaries of the Jerusalem area and into the Herodian structures of the southern and western walls of the Temple area, the Jerusalem Citadel, Mamre and Masada with its remains of Herod's palace, the Zealot living-quarters and the Roman siege-lines.

Finally, in the 1st century belong the DEAD SEA SCROLLS with their affect on Bible study and knowledge of Jewish sectarianism.  Another important find in caves of the Judean desert was the correspondence of the Bar Kokhba period.  He was the leader who fought against the Romans from 132-135 CE but was finally killed.

The catacombs at Bet Shearim gave us information about Jewish art, language, and religion of the 2nd to 5th centuries CE.  The Israel Government Department of Antiquities has from  1949 carried out the supervision and protection of antiquities, investigation of chance finds and systematic excavations.  The Israel Exploration Society has worked at Bet Shearim and Masada.

PS 3/5/14:  Besides all this, check out Simcha Jacobovici and his TV programs where he shows what he has discovered and worked on.  Entertaining as well as factual, he's a delight.  Simcha Jacobovici was born on April 4, 1953 in Petah Tikva, Israel. He is a producer and director, known for The Naked Archaeologist (2005), The Lost Tomb of Jesus (2007) andCharging the Rhino (2007).

50 people from bible confirmed archaeologically from the reference-mosaic magazine cites below.


A web-exclusive supplement to Lawrence Mykytiuk's “Archaeology Confirms 50 Real People in the Bible” feature in the March/April 2014 issue of BAR.  Purdue University scholar Lawrence Mykytiuk lists 50 figures from the Hebrew Bible that have been confirmed archaeologically. The 50-person chart in BAR includes Israelite kings and Mesopotamian monarchs as well as lesser-known figures.