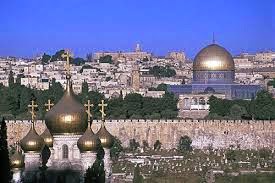 A short news story tells us about a Palestinian living in east Jerusalem, which is populated mainly by Palestinians, who happens to be associated with Hamas terrorists in Gaza.   What he has been doing to help out his cohorts is to use his axe to destroy buildings.  He used it to sabotage places where Jews live by hitting gas lines so that they would explode, cause fires and kill people.  He was finally caught.

A very long time ago Jerusalem was divided into four populated groups; Jewish, Muslim, Christian and Armenian.  Today it is a unified city with no partitions and is the capital of Israel.   Another name for it is "The City of David," for King David of Israel established this city.  David ruled in 1010 BCE to 970 BCE.  His son, King Solomon, lived from 961 BCE to 920 BCE.  There has always been a Jewish presence in Jerusalem.

Did you reverse your figures from 2001 and 2003? There must be a more recent census.

The old city must be referring to East Jerusalem where there is a higher population of Arabs. It's a separate number from all of Jerusalem in 2003.

I always use the term "liberated" rather than "captured" as Jews lived in East Jerusalem before the Jordanian Arab Legion expelled them in 1948. It was the Arabs who captured much of Jerusalem. Interestingly, most of the Arabs in Jerusalem are against coming under a "Palestinian" state. They prefer to live under Israeli governance. However, they continue their violence especially on the Temple Mount and stabbings of Jews. In other words they want their cake and eat it too. Typical. Victor